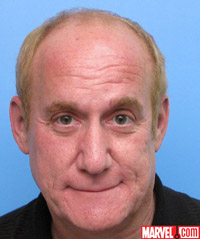 Just a few years after he was fired as head writer of NBC’s Heroes, Jeph Loeb is returning to TV writing as Head of Television for Marvel Entertainment. Loeb will work alongside Marvel Publisher & President Dan Buckley to bring the company’s characters and stories to the small screen.

Marvel is keeping mum on what characters they’ll be bringing to television, and where (although Disney’s numerous channels are a sure bet, now that the mouse owns Marvel lock, stock, & barrel), but their press release does indicate that they’re looking to produce shows that are both animated and live action. In addition to TV, Loeb will also oversee direct-to-DVD productions.

Loeb is best known for his work in comics, but he’s also the screenwriter behind numerous episodes of Smallville, Lost, and the feature films Commando and Teen Wolf.

(And despite what you’re thinking, the photo at right really is a professional headshot, and not a police mugshot.)