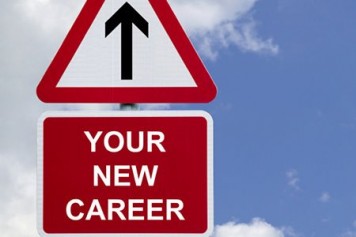 The days are long gone when you stuck with an employer (and oftentimes a job) until you retired at 65 and rode off into the sunset. These days, it’s not uncommon for a person to have several full and fulfilling careers. People are choosing to not retire, they’re going back to school in their golden years, and it’s okay if you try out one career and find that it’s just not for you. The stigma is gone, but the fear of failure is still very strong.

It’s kind of ridiculous that people are expected to decide at 18 what to major in or what vocational school to attend and jump on a path that will dictate their career for the rest of their life. Would you trust an 18 year old to do anything? College is supposed to be the time to figure out what you want to do, but sometimes what looks good on paper (or in class) doesn’t translate to the career of your dreams. It’s not too late.

Just because you got a degree in zoology doesn’t mean you can’t now pursue your dream of becoming a personal injury attorney or actor. Don’t let what other people say or the fact that you spent X amount of money on a niche education stop you from finding the career of your dreams. Sadly, most people aren’t in their “perfect” career because if they were, there wouldn’t be such high turnover rates, sick days taken or people complaining about their jobs.

Stubbornness is one of the main things holding you back, and it goes hand in hand with fear. This is especially true if you spent a lot of money on your education and/or you’re in a stable position that you don’t like, but it pays the bills (or more) and starting from scratch terrifies you. However, if you don’t make a change, you’re just settling. You wouldn’t do that in your romantic life, so don’t do it with your career.

Your most time consuming relationship

You probably spend more time with your job than invested in any other relationship. A minimum work week is 40 hours. Once you take time sleeping out of the mix, that’s your most time consuming relationship. Are you making the most of it? Whether it’s going back to school, starting that small business or actively applying for a new job, don’t waste another day.