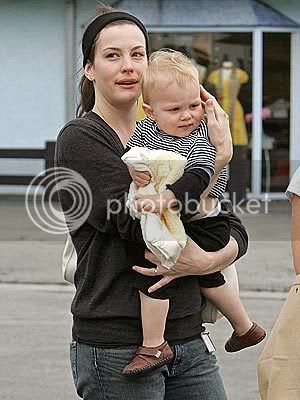 I was just trying to lighten things up a bit, because I was getting too focused on working when I found this AOL.com stash of celebrity baby videos. My favorite was Liv Tyler’s baby, Milo Langdon. I liked how he said “please” when he wanted the camera flashes to stop irritating his eyes. And I’m sure the paps found that adorable too.

While I was watching Kingston Rossdale’s (Gwen Stefani and Gavin Rossdale’s son) video, I couldn’t help realizing how the stars we so envy actually live lifestyles that are not so envy-eliciting after all. I wouldn’t want cameras in my face and photographers crowding out my family as I try to buy clothes for my toddler son. Neither would I like websites making predictions on how my daughter would be most likely to pose for a “risqué PETA ad.”

Is fame really such a great thing, when what you trade for it is the space to breathe when you’re shopping?

I had already decided that raising kids in a crowded third-world metro is not such a great idea. If you have to travel, you would have to carry your kid through puddles and up overpasses and contend with dragging them through masses of people. Would you want to put them through worse conditions: needing to shield them from privacy-invaders called the “paparazzi”?

I am no longer surprised that Princess Diana got into that fatal accident. I never really thought that the paps were that ferocious. I had seen Paris Hilton being hounded by the paps in the height of her infamy, and she actually seems like a sweetheart. And I shrugged off how they were at her house, sort of cat-calling at her, because, well, she’s Paris Hilton. If she can handle her night vision sex videos being passed through the torrents and through P2P, she can surely handle the paps.

But an utterly innocent sweetheart like Milo Langdon being subjected to flashing bulbs that won’t quit even through an adorable “Please!”??

There is definitely something wrong with the media today.

Links to the AOL videos:

Sensible comment on how paparazzi invasion is just soo wrong.