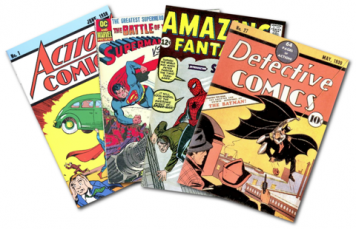 It was in the middle of the 20th century that comics became popular not only in the U.S. but as well as in Japan and western Europe notably France and Belgium.

Among the three countries, Japan was the first to develop its comics and cartoons dating back to the 13th century. By the early 20th century, modern comic strips were produced and by the 1930s, comics magazines and book collections became very common. Osamu Tezuka is the man who contributed to the popularity of comics in Japan after the Second World War.

Europe was also ahead of the U.S. in terms of comics history. Rodolphe Topffer was credited for creating the first cartoon strips in the 1830s.

The U.S., meanwhile, mass produced American comics through the newspaper comic strips in the early part of the 20th century. The magazine-style comic books came later in the 1930s.

After the Second World War, the superhero comic books did not fare well. On the other hand, the romance, crime, horror and humor types were the ones that enjoyed much popularity.

The Action comics is still the most sought after with sales amounting to $1.5 million. This is followed by the Amazing Fantasy at $1 million. The other types in the top 5 comic book sales list are Detective comics, Flash and Marvel.

It is interesting to note that 40 percent of comics fans are actually women. Research has also shown that there are more than 11 million comics fans in the U.S. alone.

In addition, many fans still prefer to read the print comics compared to the digital version. Those that purchase or read the digital comics remains to be a small percentage.

A survey by digital comics reader ComiXology also confirmed that females aged 17 to 26 are the new emerging customers of comics. Women accounted for 20 percent of the buyers new to ComiXology in the last three months. Additionally, the survey showed that those who read their first comic via the digital format, many still bought the comics in print.

Moving into the future, comic books is foreseen to remain popular notably among collectors despite the digital form and the licensed form will become the trend. Major producers will continue to create these products with kids becoming a major target audience.

Maurice is a comics collector and blogger who contributes posts focused on cool Kickstarter products.