Humans are not designed to work in office buildings. Our bodily systems are the product of millions of years of wandering the wilderness in search of food and shelter. Tasks performed sitting down are not our ideal activities. Sitting at a desk for hours on end puts incredible strain on the physique, immune system, and mental aptitude of the modern human anatomy.

Society spends a lot of time focused on the things around us and the things we do that can contribute to an early demise – violence, pollution, eating poorly, smoking, drinking, etc. – but all the while we’ve failed to rid ourselves of threats stemming from the most dangerous environment humans have faced in the last 100,000 years: the office. 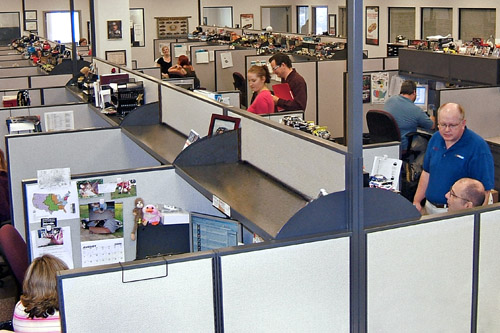 The modern office building is like a snow globe. The bits of glitter are germs and other airborne dangers. Shaking simulates centralized air flow, but as you can see in a snow globe the glittery germs never leave.

Centralized heating and cooling has caused the majority of businesses and managers of office retail to seal up doors and windows as much as possible. The result has been the creation of a bubble wherein germs, chemical dangers, and tenacious black mold circulate through the air over and over again.

The Environmental Protection Agency has said that in certain observed scenarios, the air inside office buildings can be 100 times more polluted than the air that’s outside. If you live in an urban environment where cars and buses are everywhere, let that fact sink in for a moment. Chances are your building’s intake vent for outside air hangs over a street, which means air laden with carbon monoxide is getting sucked right into the building.

The EPA even has a term for it: Sick Building Syndrome. Government regulators do what they can to make sure American office workers aren’t subjected to overly hazardous or unhealthy working environments, but the laws on the books are mainly written specifically to protect those in occupations where chemicals are used.

Despite claims at the birth of the computer age that we’d become paperless before the turn of the century, modern offices consume more paper than ever before. The health hazards for humans, however, have nothing to do with the paper and everything to do with the printing.
Toner particles are really tiny so small you never see them and you don’t feel them or taste them. But anytime a printer is used in the office these bits of toner are jetted into the air a ‘la aerosol and remain in the air for hours afterward. The problem with this is that studies indicate inhaling toner particles from one typical print job can be as bad as smoking a cigarette.

Or it can be the equivalent of working in a coal mine, depending on the amount of printing going on in the office and how big of space the particles have to be disbursed into. Either way, as stated earlier, particles in your office air aren’t going anywhere but inside your body.

You can do something about this threat by supporting an office-wide motion to get rid of printing, or at least proscribe limited instances when printing is to be permitted. That way the office can save some money on paper and printing costs while workers save their lungs.

Dangers of the Desk: Part One

If there is one thing the human body was not evolved to do it was sitting down in a chair. In fact, even sitting on a toilet is counter to the much more natural method of squatting, which frees your digestive tract instead of wedging it into a right angle inhibiting movement.

Sitting in an office chair is detrimental to your short-term and long-term health. Unless your company is kind enough to invest in chairs for back pain, then the stresses of sitting on your bones and muscles are likely to contribute to major muscle aches of the back, shoulders, neck, and head. These stresses undergone five days a week for years at a time contribute to an increase risk of heart disease and cancer.

The real worry is that evidence suggests that even counter-acting six to eight hours of sitting with a workout, whether high intensity or not, does nothing to prevent these increased risks of serious health problems caused by sitting for long periods of time. This is backed up by studies that show that workers who even get moderate exercise while they work as opposed to those who sit have a lower chance of getting cancer or having a heart attack than their seated counterparts.

Think of the human body as a bridge or other specifically-engineered structure. It was built for specific functions and for a specific place: mainly hunting and walking in Sub-Saharan Africa. Uprooted and brought to a desk, it’s no longer fulfilling its design expectations and is being exposed to demands it wasn’t made for.

Dangers of the Desk: Part Two

The fact that the average keyboard is remarkably filthy is no real shock or surprise to anybody anymore. But when put in the proper perspective, it’s probably a lot more mind blowing than most people realize.
You wouldn’t tap your fingers on a toilet seat for six-to-eight hours a day without being paid a lot more than what your job pays you. The average toilet has about 50 germs per square inch.

So next time you’re on the phone with a nit-picky customer or a disrespectful client you really want to watch your mouth.

Now that you’re more informed about the dangers of your office don’t hesitate to take your concerns to your supervisors. Federal law mandates that no one should be subjected unwillingly or unknowingly to unsafe or unsanitary working conditions. Seek out the health hazards that are plaguing your work environment and try and get them fixed.
Some are real dangers while others are just real gross to think about. Either way, it doesn’t have to continue if you don’t want it to. Time to take a stand.