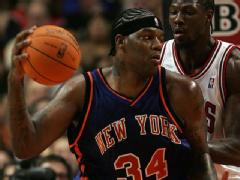 The home of seven-foot New York Knicks center Eddy Curry was burglarized early  Saturday morning. The former high school standout was reportedly held at gunpoint together with his family at his house in suburban Chicago. According to police, the slotman, along with his family and one employee were restrained as the  three masked offenders ransacked the property. According to the report, cash and jewerly were taken.

The details are still sketchy as of the moment but authorities are not thinking of this incident as a “random act”. The police are looking into the possibility of the break in being pre-meditated.

Here are the other particulars regarding Eddy Curry:

Eddy Curry was born  December 5, 1982. He was one of the best players to come out of high school in the last decade. After playing for Thornwood High School, Curry committed to De Paul University to play collegiate basketball, but he had other plans. Curry hired an agent and jumped straight to the NBA draft in 2001. He was drafted as the fourth overall pick by the Chicago Bulls alongside Tyson Chandler.

Curry was criticized for showing little intensity in his first few years in the league. Later on, he was diagnosed to have a cardiac problem that could potentially be life-threatening. Luckily for him, the New York Knicks took a chance on him and signed him to a multi-million dollar contract. It paid off for the Knicks. Curry averaged career-highs of 19.5 points and 7.1 rebounds per game. Though his rebounding and defensive skills continue to be suspect, Curry has emerged as one of the best centers in the league.