You got to be real careful around people these days. The well-meaning folks from the US Military were thinking of ways to win over the rural Afghans who have now been subject to the crossfire between the Taliban insurgents and Coalition Forces. Football is one of the most popular sports in Afghanistan, so the military decided to capitalize on this already prominent game. We’re still only a year removed from the whole hoopla regarding last year’s World Cup, so the flags of the competing countries were included in the design of the ball. 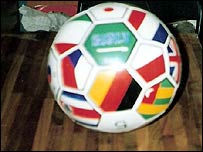 Unfortunately, including all the competing countries meant that Saudi Arabia’s flag would also appear on the ball. What’s so wrong with that? Well, for starters, the Kingdom’s green flag features not only a sword but also a copy of the Kalimatu Shahada – the declaration of faith for Muslims and something that is also considered as one of the pillars of Islam. Since the symbol is highly regarded and highly revered by followers and Allah and his prophet Muhammad, Muslims find it improper that it would be used in something that will be kicked around mud and dirt.

Saudi Arabia has always been vocal in criticizing the World Cup in using its flag for merchandise use due to the strict regulations that the religion of Islam maintains over the use of its religious symbols. Hundreds of religious leaders all over Afghanistan have also condemned the act. The balls were initially dropped from a helicopter in Khost province, but small demonstrations all across the Afghan heartland have spontaneously materialized after people got word on the supposed disrespect of the Americans for Afghanistan’s major religion.