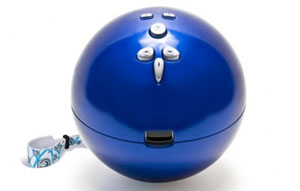 Obviously, I don’t mean that literally, but think back to the days when the Wii was just becoming popular. Remember those reports about people getting accidentally hit or TVs getting broken due to flying Wii-motes? I thought it was hilarious and didn’t really pay attention. That is, until my new (and very nice!) chandelier got smashed to pieces because of an over-enthusiastic brother-in-law playing bowling.

Anyhow, Nintendo did respond to those concerns by providing the rubberized casings to make for a better grip. They also made the wrist straps sturdier, so they would be less prone to breakage. And I don’t know about you, but I have not heard many stories of “injured” TVs or bruises from the Wii lately.

All this might change in the very near future, however, if this new Wii accessory takes off. Just take a look at that baby – a “real” bowling ball that you can use to, well, bowl. Created by CTA Digital, this Wii Bowling Ball accessory definitely adds a realistic aspect to the game. So how does it work?

First, open the ball. Put the Wii-mote inside, and then close it. Now, look for the three holes – you can’t miss them – and stick your fingers into it, just as if you were really bowling! Oh, and do NOT forget to put the strap on TIGHTLY.

And just so you don’t get too “realistic” about it, you are NEVER to release the ball. EVER.

I can just see the news now…smashed TV screens. Broken vases. Broken windows. Needless to say, I do not think I will be getting one of these. I never really liked bowling games anyway.