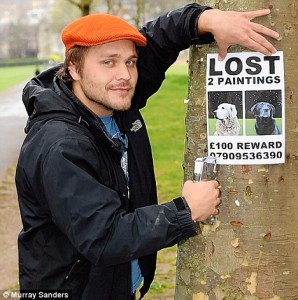 This is a rather unusual effort to drive the “love for the environment” campaign by the Brighton and Hove City Council in the UK. While most campaigns would grow around information and pro-activity events, this council bears a little teeth by sending a memo to Artist Anton Cataldo for stapling a lot of “lost & found” posters all over what seems to be where he allegedly lost 2 prized paintings.

The fine was later withdrawn but the memo lives in “infamy”, well at least for Cataldo. ‘I found the council email quite patronising. I’m not an expert but I doubt very much that a staple could cause so much damage to a tree that it would actually die.’

He continued: ‘I’m quite a considerate person and I would never knowingly do anything to harm a tree. I didn’t realise there was a law about putting posters up, as you often see them around.

Mr Cataldo complained to the council about the fine, which has since been cancelled. A council spokesman said: ‘This was probably a case of an officer who was a little bit over-zealous.’