The days of rock and roll will never be over. Many icons may have passed on and band members may have gone their separate ways but their music lives on and they always get together again on special occasions such as their anniversary.

That’s how it is with the Rolling Stones. They continue to rock the world and as the band celebrates its 50th year, some creative minds came up with this site called HowtheStonesroll.com to share cool graphics showing the Stones’ journey. 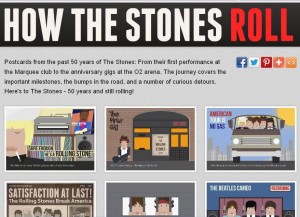 So what’s up with the Rolling Stones this year? Plenty of activities to keep them busy.

In November last year, the band went on tour to play two shows commemorating their 50th anniversary. That was the first tour of the Stones in five years and that was even followed by two gigs in the U.S., New Jersey in particular. 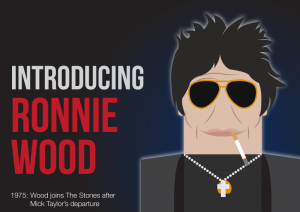 This 2013, the band has been nominated for a Brit award for best live act. Again, this is the first time in 17 long years.

The Stones have also been invited to the Glastonbury Festival. Keith Richards and Mick Jagger were reported to have expressed their desire to be there but nothing is final yet. Jagger was quoted as saying “Glastonbury is very important. It seems very important to my children.” 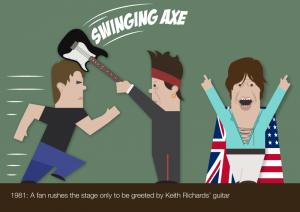