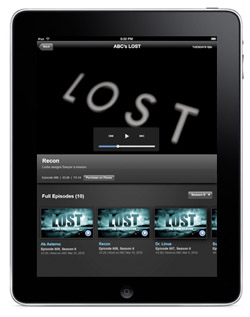 ABC has shown itself to be the most forward-thinking broadcast network, technologically-speaking, with its robust new app for the hyped-out-of-control iPad. The ABC Viewer app turns your iPad into an ABC-on-demand device, allowing you to stream episodes from any of ABC’s shows directly to your device.

Want to catch up on missed episodes of Lost, Grey’s Anatomy, Desperate Housewives, Dancing With the Stars, or any other ABC show? Just download the free ABC app and tap on the show you want to watch. You’ll have to watch some limited commercials — just like if you stream ABC’s shows in your computer’s browser — but the content is entirely free.

It’s kind of surprising that Apple would approve an app that competes directly with its own iTunes store. After all, ABC’s entire catalog of shows and episodes is available to purchase on the iTunes store, and this clever ABC app circumvents that entirely. Granted, you don’t get to download and keep the eps you watch, but why would you need to if you can stream them anytime for free?

No other networks have jumped on the iPad bandwagon yet, which is disappointing, though Hulu is reportedly working on an iPad app, which will bring lots more free, streaming TV shows to the “revolutionary and magical” new device.