ABC has announced the mid-season return of V. The alphabet net will pair up the alien invasion saga with No Ordinary Family on Tuesday nights at 9:pm, starting January 4th.

NBC, meanwhile, has given full-season orders to three of its new-in-2010 shows. The Event, which is among the highest-rated shows of the new season, has gotten an additional order of nine more episodes, giving it a full 22-episode first season. THR suggests that this is especially good news for fans, since their sources indicate that the big reveal of just exactly what “the Event” is, is planned for the end of the first season. Law & Order: Los Angeles and Outsourced have both gotten a back 9 order as well.

The verdict is still out for freshman series Chase and Undercovers, although Undercovers probably stands a decent chance, thanks to JJ Abrams’ clout in the industry (though speeding up reveals about the show’s mythology would certainly help), and Chase‘s modest ratings could be enough to allow it to survive the season.

Earlier today, I told you about the twelve new shows NBC has on tap for the Fall 2010 season. Now NBC has released trailers for all but one of them, and here they are. (Law & Order: Los Angeles has no trailer, as nothing has been filmed yet.) 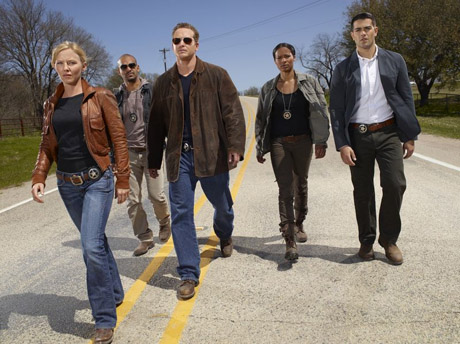 NBC, which is still in need of some hot properties after the drought of quality programming they’ve experienced in the wake of Lenogate, keeps snatching up new shows.

The latest is Chase, from producer Jerry Bruckheimer. NBC calls the show an “action procedural,” in which a team of U.S. Marshalls hunt down the most dangerous fugitives in the nation. The fast-paced drama stars Kelli Giddish as Marshall Annie Frost, a deputy from Texas who’s described as having a cowboy sensibility and a sharp mind.

The way NBC talks about it, Chase sounds like a show with the trappings of a procedural (a villian-of-the-week, with no ongoing storylines) paired with a jolt of action and adventure. If it lives up to its name, it could be a diversionary fun.