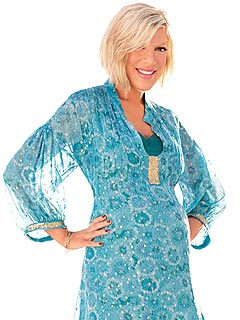 Tori Spelling heard there were plans of doing a remake of 90210 while researching for her book.

“My dad always wanted to do a new version of 90210, so I’m sure he will be beaming from above!” Spelling says, referring to her Dad (and the show’s original producer) Aaron Spelling. “And I’d love to somehow be a part of it. That as well would make my dad proud!”

Tori sees herself playing the role of a young step mom. “Playing the funny sex ed teacher at the high school would be funny, too, considering Donna Martin was America’s most infamous virgin.”

There are no definite plans for the show or her role in it, but anyway the actress is busy with a sequel of another kind — she recently announced that she is pregnant with her second child.