In 1970, David Bowie said that Berlin is the greatest cultural extravaganza that one could imagine. It could have something to do with its thriving community of museums (the total reaching 170) or with the number of monuments preserved in the capital. Considering the city’s history, it seems almost a miracle how much of the culture has been kept intact. While the Berlin Wall is reduced to mere memories and rubble, there are still plenty of attractions keeping Berlin alive.

Speaking of Berlin today, there are two very distinct media towers in the city that symbolize its ever-evolving culture. The Television Tower and the Radio Tower. The Television Tower, measured at 365 meters, is located approximately in the middle of the city. From afar, it looks quite like a ship’s mast. However, don’t let looks deceive you. The shiny ball on top of the tower actually holds seven storeys. Only two of them are open to the public namely: the viewing floor and the Telecafe which has revolving capacities once every hour. Imagine yourself drinking coffee and relishing a 180-degree (horizontally, is it?) view of Berlin. For a moment, you can forget about the rest of the world.

Meanwhile, the Radio Tower stands at a mere 150-feet next to the Television Tower. It mainly functions as a transmission tower although it does have a viewing platform as well. For those who have a fear of heights, perhaps this tower is the one for you.

From media structures, we move on to holy grounds. Quite a leap, isn’t it? ~:> Whether you’re religious, spiritual or simple non-committal, the Berlin Cathedral is a stop worth taking. Tracing back its origins to the middle ages, the cathedral has retained that old world grandeur in its design. Of course, it has undergone several makeovers since then. The interiors are no less impressive. However, it is extremely breathtaking at night when the lights from the ground illuminate the green-colored domes.

On a smaller scale is the Marienkirche or the Church of Mary. Built sometime during the 1200’s, this Gothic, brick church has survived more than a hundred years in its historical form. It just goes to show that bigger doesn’t always mean stronger. Among all the architectural movements, I’m more swayed by the Romanesque and Gothic styles. There always seems to be more mystery and depth to them. In fact, you can find Germany’s oldest mural, entitled Dance of the Dead, somewhere inside the walls. How’s that for mystery? 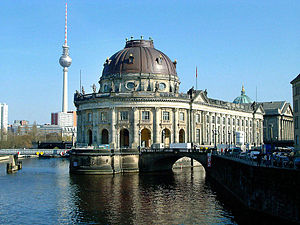 Among the hundreds of museums in Berlin is the Bode Museum. It’s hard to miss this particular gallery simply because it stands at the edge of the museum island! Part of its beauty comes from its strategic location– enabling a mirror image to be reflected on the water.

Last (on this article) but certainly not the least is the last remaining city gate of Berlin. The Brandenburg Gate is considered to be Berlin’s most famous landmark. Located between Pariser Platz and Platz des 18, it emanates a charm all on its own. The gate is supported by 12 pillars, six on each side. On top shines the goddess of victory Viktoria driving a four-horse chariot. While a favorite of many tourists, Brandenburg serves as an important national symbol of unity!

(Images used in this article are not mine)