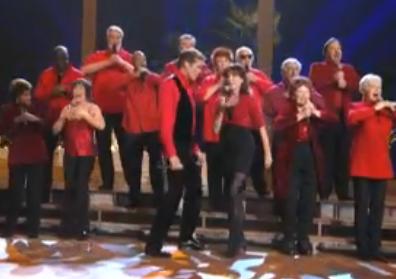 TV Land Awards is over but people are still talking about the Glee tribute during the awards show. Glee bagged the “Future Classic” award, and though I love Glee this kind of award is obviously a “let’s-wait-and-see-if-that-does-pan-out” thing. What we can be sure though is the “TV Land Glee club’s” rendition of “Don’t Stop Believing” is a mega hit. The performance included David Hasselhoff and Marilou Henner as the lead singers (is that what Rachel and Finn will look like 30 years from now?). Other glee club members include: Todd Bridges, Joyce Dewitt, Jamie Farr, Marla Gibbs, Howard Hesseman, Shirley Jones, Richard Karn, Richard Moll, Marion Ross, Jimmie Walker, Marcia Wallace and Fred Willard. The twist of having the old and familiar faces on TV paying tribute to the new is just totally fun and surprisingly good to watch. The original Glee rendition was better of course but theirs wasn’t live, was it?

Other shows that took home an award on the 25th include:

Also honored during the awards were Bosom Buddies, now on its 30th anniversary; Mel Brooks and Carl Reiner, for being legends in comedy; and Farah Fawcett, whose tribute was presented by Ryan O’Neal.