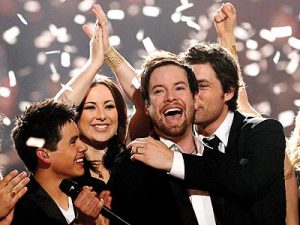 Amazing, amazing, amazing. We really love this contestant: he’s original, he’s talented, and he’s got a sensitive side. (It was touching to see him cry — and the way he gracefully tried to show his respect for David Archoleta during the final “victory song.”)

He granted his first interview as the new Idol backstage, where he spoke of the future, and Simon Cowell’s unexpected apology.