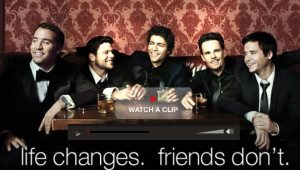 Guess what I just managed to miss? The season premiere of ENTOURAGE! Argh. Of course, I will be making sure I get to see it not only because I want too but because it seems that going from everyone else’s reactions this season is going to be great. Here’s what people have to say about the season six premiere episode “Drive”

The wait is finally over and the boys of Entourage came roaring back for the sixth season premiere tonight on HBO. This episode had it all: classic Johnny Drama lines, the guys giving E a hard time, Ari treating Lloyd like his lap dog and some Vinnie sexual escapades. Throw in some great naturalistic dialogue and superb editing and this season looks like one hell of a ride. – Janaki Cedanna of TVFodder

Overall, it was nice to see the boys doing well, and finally branching out of their own inner circle. – Allysa Lee of LA Times

Everything we knew about Entourage finally seems to be evolving. Some of it’s logical and some of it’s forced so that the story progresses, but all of it makes sense. Entourage was due for an overhaul if you think about it, and what could be more perfect than seeing what life is like for the guys when they aren’t constantly worrying about Vince’s career? – Jonathan Toomey of TV Squad