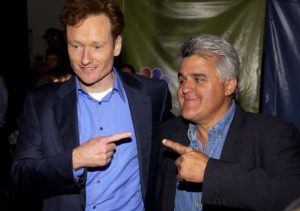 Wait and see. That’s all we can do till Jay Leno, Conan O’Brien and NBC comes up with a compromise that will make them happy (or at least less unhappy).

Just a few months back I was one of the eager well wishers for Jay Leno’s move to primetime. I guess all that good luck and positive energy just didn’t work. Viewership for the Jay Leno Show did not go up (compared to his viewership for the last season of the “Tonight Show with Jay Leno”) and ended up disgruntling NBC’s affiliates, whose local late newscasts’ viewership depend a lot on the previous show. Compared to the viewership of the top show in the 10pm time slot, Jay Leno’s 5.8 million viewers is definitely a far cry from CBS’s “The Mentalist” viewers of 17.5 million. Guess how many people bother to change channels just to watch late news? Definitely not that much.

Because of this, even though talk shows are far cheaper to produce, it is obvious that NBC’s revenues are taking a big hit from the “mistake” of moving Leno from late night to primetime. Their problem now is how do they move Leno back to late night? What will they do with Conan (put him back to 12mn?) and what will they show for the 10pm slot?

According to Jay Leno, “NBC is working on a solution.” What that is, as I said, we’ll just have to wait and see. In the meantime, Conan promises that “We’ve got a great show for you tonight. I have no idea what time it will air — but it’s going to be a great show.”