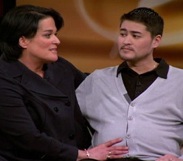 Thomas Beatie, a transgender male, announced that he and his wife Nancy (who is unable to bear children because of a hysterectomy) were expecting their child this summer. “I’m a person and I have the right to have my own biological child.”

Beatie refuses to get into a metaphysical or psychological debate of whether or not his decision changes his identity as a man. “I see pregnancy as a process and it doesn’t define who I am. Ironically, being pregnant doesn’t make me feel any more female or feminine.”