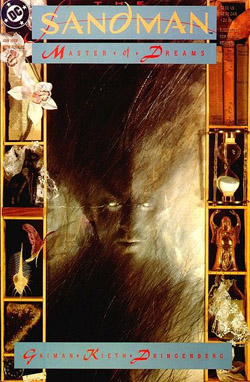 The long-fabled screen version of Sandman is once again in the works, but this time it’s for the small screen, not the big one. DC Comics has been trying to get a live action version of Neil Gaiman’s seminal comic book off the ground for years, and now WBTV has reportedly decided to lend their sister company a hand.

There’s no word yet on what network Sandman would air (though one imagines it would be best suited to the likes of HBO or Showtime), as it hasn’t been pitched to any networks yet. But here’s what is known.

At the moment, creator Gaiman has no involvement with this iteration of his classic work, though that could change. And topping the list of TV creatives WB is seeking to adapt and run the potential series is Eric Kripke, the creator of Supernatural. Reportedly, Kripke is interested, but is weighing the decision very carefully, knowing that this property’s fans are akin to those of Watchmen or Lord of the Rings, meaning they will scrutinize every last detail of the production.

Kripke recently departed Supernatural after completing his five-year plan for the show — even though The CW renewed it for a sixth season. So he’s certainly available. And something like this, if successful, would add tremendously to his cache in Hollywood.

Sandman, for the uninitiated, was a sweeping narrative about the Endless, a group of mythical beings that personified Destiny, Death, Destruction, Despair, Desire, Delirium, and Dream. The story initially follows Dream, ruler of the dream world, who escapes a 70-year imprisonment and sets out to rebuild his kingdom, though later entries in the series broadened the scope to other mythical kingdoms and includes lots of one-off short stories.