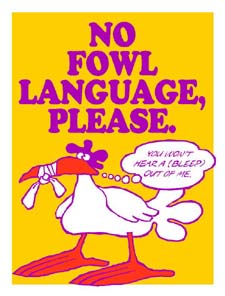 Appearing on TV anytime soon? Better clean up your language. Well if you don’t like the network you’re going on and you’ll be live start cussing on TV because it sure will get them in trouble.

The Supreme Court has decided to take a stronger stand against the use of indecency in TV as you can see in their decision on the case of FCC (Federal Communications Commission) vs Fox TV (Case No. 07-582) last Tuesday. The courts decided in favor of FCC with 4 out of the 5 justices concurring with the decision. In the case syllabus they stated that the “Federal law prohibits the broadcasting of “any . . . indecent . . . language,” 18 U. S. C. §1464, which includes expletives referring to sexual or excretory activity or organs.” It doesn’t matter whether the indecency be scripted or not a repeated offense or not. The court will be taking a stronger stance that will be forcing TV stations to be more conscientious in editing stuff before they show it.

For parents this is a huge relief because we all know just how much vulgarities about in television today. As Justice Antonin Scalia wrote, “The commission could reasonably conclude that the pervasiveness of foul language, and the coarsening of public entertainment in other media such as cable, justify more stringent regulation of broadcast programs so as to give conscientious parents a relatively safe haven for their children.” On the other hand we adults will have to contend with all the bleeps that we can expect to be hearing even more frequently now.