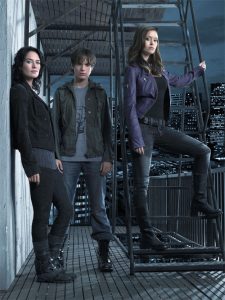 Terminator: The Sarah Connor Chronicles fate is still uncertain with Fox still not giving an official statement on whether it will still have a 3rd season or not. Until it releases its list of pick-ups for next year (to be announced mid-May) we can only keep track of all the things being said by people who are supposedly in the know.

The bad news for fans is that so far Fox still says that “no decision has been made yet” but insiders claim that it is pretty terminated, which makes the outlook pretty grim. The rumours were further substantiated when EW’s Michael Ausiello was quoted to have said,”It’s done. Everybody has pretty much known for a couple of weeks.” The good news though is that the show’s co-producer, Ashley Edward Miller, has given a little ray of hope for those who don’t want to see the show gone in her exclusive interview with Patrick Sauriol of Coming Attractions. Here’s an excerpt of the interview:

CA: The fans know that the show has been struggling in the ratings but the rumors that it had already been cancelled as well as the revelations in the final two episodes seem to have led to a sizeable outpouring of fan support online. What are your thoughts on the EW article? Do you think that this kind of talk hurt the show’s chances for renewal?

AEM: I thought it was ridiculous. There’s no question that the show has been struggling, but there’s also been no ambiguity about when Fox intends to decide our fate. When you realize how many times the press has declared this show dead, you start to see how silly it can all get…

So there, at least we know for certain is that it isn’t cancelled YET, and though I don’t watch TSCC regularly I do hope the fans get to convince Fox to give it another chance. We need all the intelligent shows that we can get what with all the stupid shows out there right now.