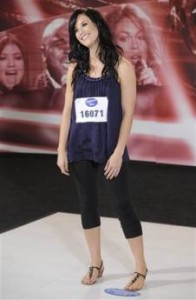 This is sad news for American Idol hopeful Joanna Pacitti, as she has recently been disqualified from the top 36 show semi-finalists.  The show has cited that Joanna knows at least two show employees, and to avoid any suggestion of unfairness they had decided to just do the “right” thing.

The decision was made because Pacitti had once worked with a person subsequently hired by 19 Entertainment, which produces “American Idol” with FremantleMedia, said another person familiar with the disqualification. Pacitti also knew a second 19 Entertainment employee, the person said.

On the other hand, this is good news to every American Idol fan. The show is primarily about talent, but integrity is the most important thing these days even in the entertainment industry.

I commend the show producers for making this hard decision.  It is a firm lesson to everyone indeed.