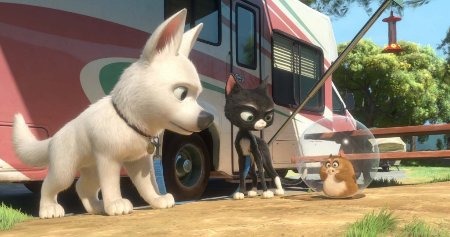 Watched Bolt with my daughter last Sunday here in downtown Chicago.  Good movie actually, funny too, the lines were clean and the plot was clear.  I’d recommend this movie for the family to see because we had a good time.  Bolt is about a movie dog who was kept in a movie trailer his whole life.  He actually believed what he was because he was separated from the real world.  He believed he had super powers.  The twist was when he was accidentally separated from the movie set… now he had to be a real dog in the real world.

In Bolt’s effort to be reunited with his person/owner, he had to go through a lot of ordeals.  From meeting an alley cat (who eventually became his best friend) to even having a hamster save him from the sure sting of death.

I won’t post any spoilers here, but if you’re looking for a great movie to see with family … this is it.  🙂