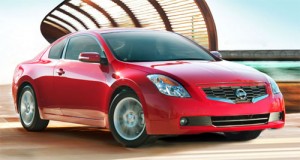 Hmmm…. now this may or may not sound serious but I have stumbled upon a Daily Herald report that an Illinois man was allegedly caught stealing his dream car… a red Nissan Altima.

From AP “ELGIN, Ill. (AP) — He freely admitted that his dream car is a red Nissan Altima with a push-button ignition. A 21-year-old man was charged Monday with burglary and attempted theft for allegedly trying to steal one from a Nissan auto dealership. Police said the man saw the car on the showroom floor around midnight on Sunday.

My take on this… hey if you’re going to risk jail time, the least you could do is aim a little higher than a Nissan Altima… say a Porche? A Jaguar? A Mercedes Benz perhaphs… ooohhh… bonkers!