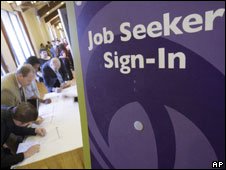 BBC.co.uk has just reported that the unemployment rate of the United States has risen from 5% to 5.5%.  Considering the USA is the world’s biggest economy, news such as this is a shocker in all areas.  Unemployment in the end will give way to lower purchasing power, which later feeds into industry stalls… hard-core recession.

The rise by .5% happened in just this May 2008.  Analysts have recorded it as the fastest in two decades.

The US Labor Department said the economy lost 49,000 non-farm jobs.

It follows a 28,000 decline in April, and will fuel fears the US economy is sliding towards recession, analysts said.

The worry is that a weak labour market will see consumers rein in their spending, hurting corporate profits.