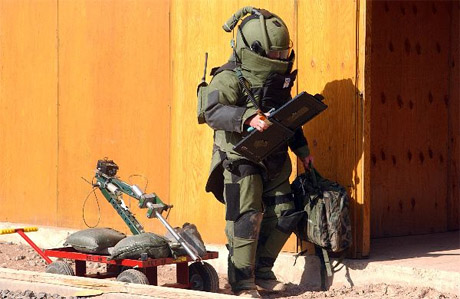 G4, the network best known for its coverage of video games, has ordered a new series that’s a sort of Cops-meets-The Hurt Locker. The reality show will take viewers behind the scenes of an American bomb squad in Afghanistan.

The show’s producers have been granted special permission to travel with and film the operations of a Navy Explosive Ordinance Disposal unit. The 10-episode series is said to start with the crew undergoing training in the U.S., and then a months-long deployment in Afghanistan.

Over the last few years, G4 has been trying to branch out with its programming, to appeal to more than just the “hardcore gamer” set. Bomb Patrol: Afghanistan will be the cable network’s boldest move yet into new territory, while still appealing to the geeky viewers who just want to see stuff blow up real good.

I’m not generally high on reality shows these days, but after looking at the photos on the EOD website and seeing how hardcore these guys are (they have to be trained scuba divers, on top of everything else), I think this could actually be pretty cool.