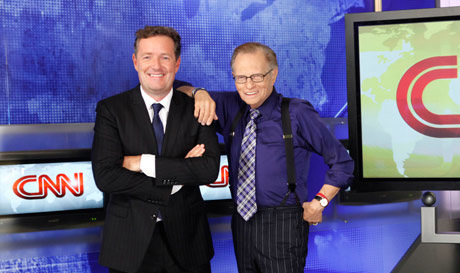 America’s Got Talent host and British journalist Piers Morgan has signed on with CNN as Larry King’s replacement. Though he won’t be taking over King’s chair (or trademark suspenders), he’ll be launching a similar hour-long interview program in King’s longtime time slot.

Larry King Live is scheduled to air its final show on December 16th; Morgan’s as-yet-unnamed show will begin in January. In addition to his duties on America’s Got Talent — which he’s not giving up — Morgan is also well-known in Great Britain as a newspaper reporter and editor, and as host of the BBC show Piers Morgan’s Life Stories. Morgan is also expected to contribute regular columns to CNN.com.