Feeling left out? Uncool? Not part of the in crowd?

Then you must’ve been unable to catch the most talked-about new show of the season when it first aired. To soothe your outsider-y pain, AMC is giving you a second chance to get caught up. Only without that pesky week-long wait between episodes.

This Friday, March 4th, at 8:pm, AMC will air a back-to-back marathon of all six episodes of The Walking Dead‘s first season. Even if you saw the show when it first aired, there’s good reason to tune in: each episode will include exclusive behind-the-scenes content, including interviews with showrunner Frank Darabont, source comic book creator Robert Kirkman, executive producer Gale Anne Hurd, and special makeup effects designer Greg Nicotero.

The marathon will also include a first look at AMC’s new series, The Killing, which will air at 9:30pm and again at 12:45am.

Get the complete first season of The Walking Dead on DVD

The first season finale of The Walking Dead on AMC drew six million total viewers, its best numbers all season. The Walking Dead is already the most-watched drama series on cable in the 18-49 demographic. Four million of the finale’s viewers came from that demo.

The Walking Dead season 1 finale scored a 4.1 rating, and it won the night with the best ratings for original series on basic cable. The show is reportedly a similar hit overseas, where it’s shown in over 120 countries thanks to Fox International Channels.

The Walking Dead has let go of its entire writing staff, per what sounds like Frank Darabont’s personal instructions. Darabont, who’s best known as the writer/director of movies like The Shawshank Redemption and The Green Mile, is the primary creative force behind bringing The Walking Dead to the small screen, where he serves as producer, head writer, and occasional director.

According to Deadline, Darabont’s plan for Season Two of the show is to not use an on-staff group of writers, but instead to hand out assignments to freelance writers. The Walking Dead would not be the first show to use this method; many British shows are known to do the same, including the upcoming BBC/Starz coproduction of Torchwood.

If this is Darabont’s plan for the show’s second season, it could be problematic for the Writers Guild of America, which is known to be fiercely protective of its members’ treatment and wages. Is this the first hint of a paradigm shift for how TV screenwriting works? Only time will tell.

In related news, The Hollywood Reporter says that the first season of The Walking Dead will arrive on DVD and Blu-ray sometime next Spring. The first season finale premieres this Sunday, December 5th.

Even though The Walking Dead has only aired two episodes so far, AMC has renewed the series for a second season. Season One is comprised of just 6 episodes; Season Two will get 13.

The show has also been renewed by Fox International Channels, which premiered the show around the globe simultaneously with AMC in the U.S. The Walking Dead broke premiere ratings records in no less than one hundred and twenty countries across Europe, Latin America, Asia, and the Middle East.

Sharon Tal Yguado, senior vice president of scripted programming for FIC proclaimed that her networks “want at least 10 seasons, if not more.” 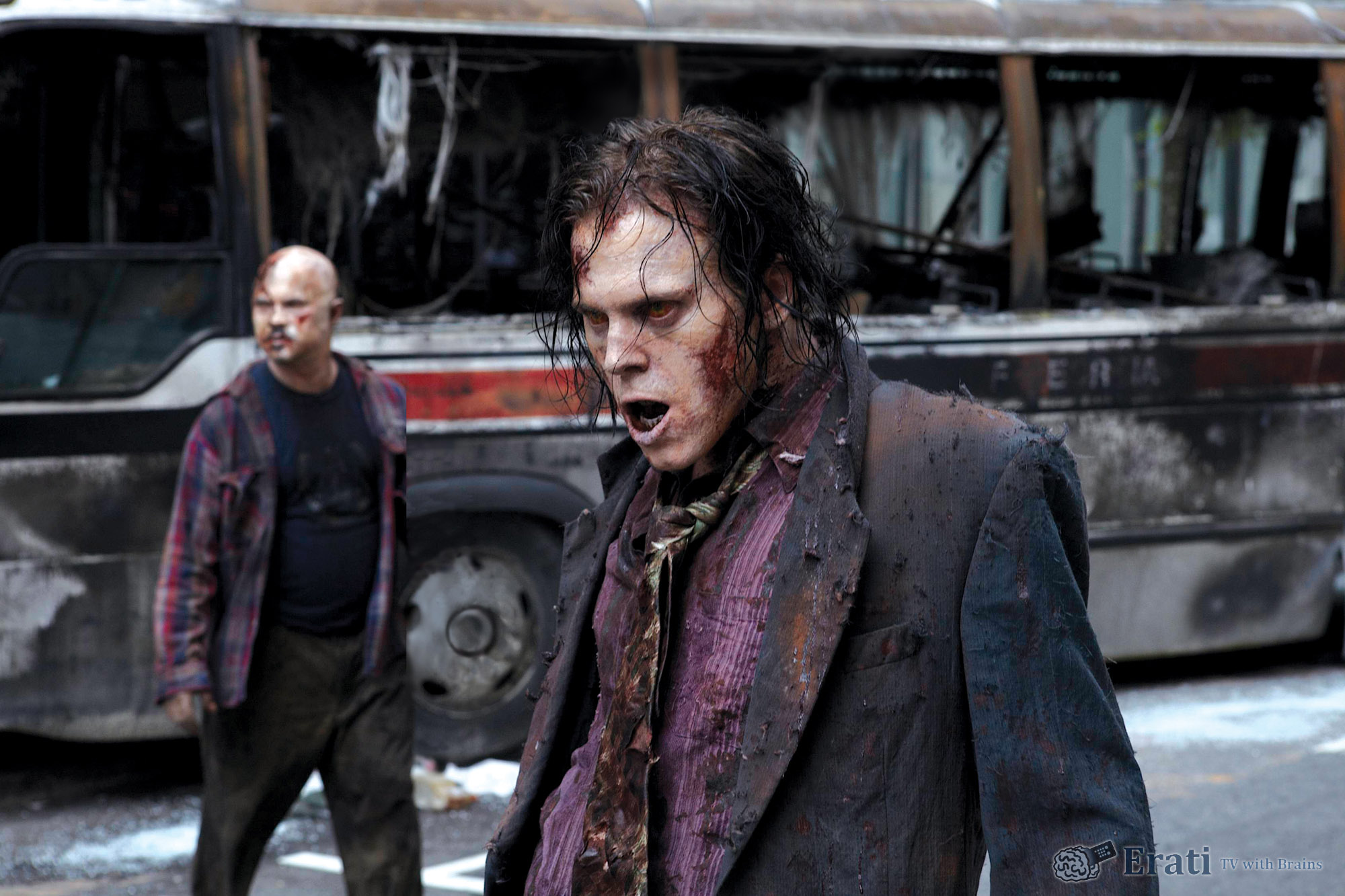 AMC‘s high-profile premiere of The Walking Dead scored more than 5.3 million viewers Sunday night, with 3.6 million in the 18-49 demographic. Those numbers are good enough to make it the highest-rated pilot for any original cable series this year.

This is a huge win for AMC and for the creators of The Walking Dead in particular, who shopped their brutally realistic zombie drama to other broadcast and cable networks and were shot down. (Rumor has it the other networks balked because they didn’t think zombies had the same zeitgeist appeal of that other supernatural creature: the prettier, more angsty vampire.)

But the show came out of Comic-Con this year with a hot trailer and a huge buzz that refused to be ignored. If these kinds of ratings can be sustained with minimal drop-off (which seems unlikely, and I’ll explain why in a minute), then a second season is a foregone conclusion.

“The Walking Dead is that rare piece of programming that works on so many levels. It is legitimately great storytelling that is not only highly entertaining, but incredibly thought provoking as well. People who are familiar with the comic books know what’s coming, but suffice it to say, this is only the beginning of a long, intense, and powerful ride. Long live The Walking Dead,” said Joel Stillerman, AMC’s senior vice president of original programming, production, and digital content.

So here’s why I think The Walking Dead is a winner for the long haul. Cable TV has caught on to the same idea that foreign networks like the BBC have known for years — but which eludes the networks — is that shorter seasons lead to better storytelling. Everyone knows that serialized shows have greater depth, better characters, and more interesting stories than their standalone brothers — even the ones who won’t admit it. But networks can never seem to wrap their brains around how to make serialized shows commercial, because their business model is too committed to the 20+ episode season. It’s simple math: lower the episode count in a season, and you lower the requirement for an audience to keep up with an ongoing storyline.

The Walking Dead‘s first season consists of just 6 episodes. That’s an awfully easy commitment for a viewer to make.