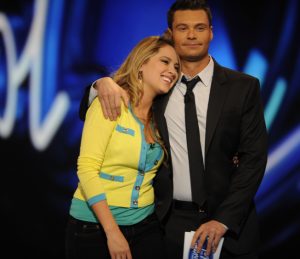 The votes are in and America got it mostly right. AI girls voted out tonight were Janelle Wheeler and Ashley Rodriguez. For the boys the first two to go were Joe Muñoz and Tyler Grady.

I’ve got to say that for the girls America got it right. Though it did look like the judges were rooting for Ashley Rodriguez, at least compared to Didi Benami, both she and Janelle was among the girls who I though could be going home simply because of their song choice. Their voices weren’t powerful enough to do their songs any justice, leaving their performances flat. It showed in the votes and the results wasn’t a big surprise. For a minute there though I was really nervous for Didi Benami because though I really liked her performance the judges disagreed and it left me wondering if I was the only one who thought she should stay one – apparently I wasn’t. Yay!

It was the guys’ results that gave us a shocker though. Joe Muñoz definitely did not deserve to go home last night. His performance was realy good, especially compared to Tim Urban’s and Alex Lambert’s. Apparently even Tim Urban agreed because the look on his face when he was declared safe was priceless – utter shock. Clearly Urban’s good looks saw him through this round. On the other hand, Tyler Grady’s “American Woman” did not endear him to America’s women, resulting in his being voted off. I am sorry to see him go though because he is such an interesting character and would definitely have made AI more interesting. Am not feeling to bad about it though because it meant that Alex Lambert (whose surprised expletive at not being voted off lead to AI being cut short) gets to stay another week. I don’t believe that he’ll last long but it’ll be nice to see him “ripen” up a bit.