A destructuve man-made virus has plagued the whole of New York City. Only one man and his dog are spared. For some reason, scientist Robert Neville (played by Will Smith), is immune to this virus. For three consecutive years, he has made attempts to communicate with the outside world without fail. But as soon as night falls, shadows rule the depraved city. These shadows are called The Infected– those who have been transmutated by the virus. It is up to Neville to find a cure. But how long can he survive? 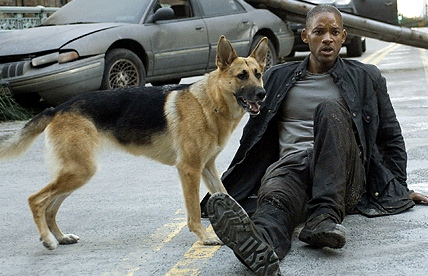 Recently, I find myself frequenting cinemas. I’ve just seen “Beowulf” and “Enchanted” and am gearing up to watch “Superbad” next. Maybe it’s the cool holiday season or the fact that I seem to have a little extra cash to spare that’s prompting me to get out of the house. Whatever the reason for it, I have to say that I am thoroughly enjoying myself. Along with watching the movies, I also enjoy watching the trailers that come before. I love trailers and seeing “I Am Legend” really excited me.

Will Smith is one of the best actors around. He dedicates 100% of himself in all his roles, thereby creating a realistic performance. In “I Am Legend,” he plays a scientist who tries to find a cure for those infected with a man-made virus in New York City. It is a pretty challenging role since it requires a lot of running, running and running.

The movie is actually the latest of four adaptations of Richard Matheson’s novel also entitled I Am Legend. In 1971, the sci-fi novel underwent movie production and was entitled “The Omega Man” that starred Charlton Heston. In this version, Robert Neville finds himself alone after a huge apocalyptic eruption that resulted from mass biological weapons. Quite an apt plot that reflected the times like that reported genocide in East Pakistan in March and April of that year.

This latest adaptation is directed by Francis Lawrence who is more well-known in the field of music videos. He is currently set to direct “Eddie Dickens and the Awful End” and “Snow and the Seven.”

“I Am Legend” is set to hit US Theaters this December.