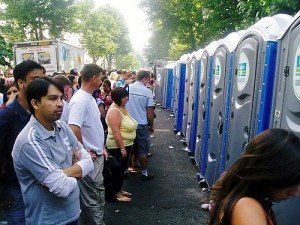 It’s no joke, the Guiness Book of World Records says “a world record in the length of a queue to a toilet was set on Sunday when 756 people lined up to a latrine in central Brussels to raise awareness for the need for clean water on World Water Day.”

What an achievement! And boy did it raise eyebrows AND awareness to the cause of World Water Day.

The event was organized by the United Nations’ children’s agency UNICEF which gave each participant a wristband with his or her number in the line and T-shirt certifying participation in the event.

“The latrine was of the same design as we use in third world countries — a dry latrine — and we formed the longest queue this morning,” UNICEF spokesman Benoit Melebeck said.

All I can say is… let the record be broken next year! I’m sure the organizers are thinking of more “grandiose” ways for clean water.