Spiderman is one of the most enigmatic characters Marvel ever produced. With thousands of comic books and the popular live action series, everyones favourite web-head has also appeared in a slate of big budget Hollywood movies. Most recently, The Amazing Spiderman claimed the number one spot at the box office for a little over a week. This recent incarnation of the series saw Andrew Garfield don Spidermans signature red and blue costume. Garfield seemed to be a perfect fit for the role, which entailed Peter Parkers quick witty remarks and comedic nature. To most fans of the franchise, however, it seemed the movie clearly missed its mark In fact the villainous Lizard character did not even look like the original character. While Garfields performance was intact, many believe he failed to truly capture the allure and essence of Spiderman. 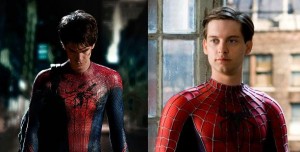 The Amazing Spiderman 2012 was a stand-alone production. This means it had nothing to do with the previous 3 Spiderman films. The latter, of course, was headlined by Tobey Maguire and co-starred the bubbly Kirsten Dunst. From The Green Goblin and Doctor Octopus to the Sandman and Venom, the Spiderman movies offered hours of non-stop entertainment for fans and the media alike. According to the critics, Maguire easily blended into the role, while Garfield seemed to struggle. Maguire’s performances were also natural, while Garfield employed method acting to try and get into the role. The result by far is a clear Maguire victory. To date, many still remember the on-screen chemistry between Maguire and Dunst. At the same time, they also long for the action and crisp story lines that blanketed the first three movies.

In total, the first Spiderman movie made $821,708,551 at the box office. This far exceeds The Amazing Spiderman 2012 movie, which secured $552,598,265 worldwide. Since there were two more sequels after Spiderman, the grand total of all three original films sits at $2,496,346,518. This is considered one of the top grossing franchises in comic book movie history. In fact, it surpasses that of the Batman, Avengers, Iron Man, Hulk, and even the Fantastic 4 films. No matter the gross totals, the majority consensus is that Tobey Maguire far excelled in the Spiderman role than Andrew Garfield. While Garfield performed brilliantly in The Social Network, he just failed to deliver and convince audiences about the mystique of the wall crawler. While the current Spiderman movie still soars in global popularity, its domestic numbers have decreased in recent weeks. It just seems to have lost its momentum at the box office.

This article was brought to you by Chris. Chris is a huge movie enthusiast and content writer for movies.com.au.