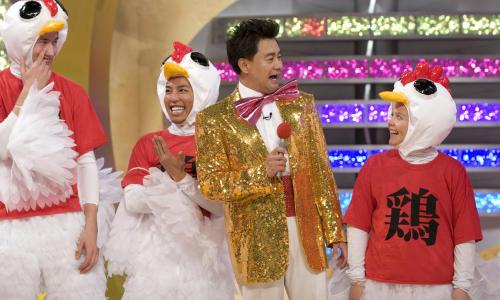 Candy or Not Candy?

By the end of watching an episode, you might find yourself looking around your surroundings for something to eat because that is what they literally do in this game show. Celebrity contestants go around the studio looking for the things that they think are sweets. The rules are simple but what is so entertaining about the show is when they try to find out if the object – a shoe, a door knob, anything – is actually edible or not. To find out, they have to take a huge bite of the object, subjecting themselves to embarrassment, if it is not candy, or some sweet treats, if it does turn out to be candy. The awe of shaping these sweets into some kind of object, and the suspense of finding out the truth will keep you watching for more.

Non-Japanese speakers know it as Human Tetris but its original name is, “Tonneruzu no Minasan no Okage deshita.” If you have seen Hole in The Wall, it is actually the same game. However, what is different about this game show is that the shapes of holes are not actually human-friendly. The contestant’s creativity and cleverness would be challenged – having to think of different positions and gimmicks just so that the wall wouldn’t push him.

VS Arashi is a game show hosted by the boy group Arashi. Arashi invites a group of guests which they would be battling with in a series of games. What is so entertaining about this game show is that they change their games from time to time, so it is guaranteed you wouldn’t be bored with watching the same games over and over again. The groups’ physical strength and their teamwork is tested in VS Arashi with games such as Cliff Climb, Rolling Coin Tower, and Falling Pipes. This show would definitely a show to watch with the family.

Missitsu Nazotoki Variety Dasshutsu Game DERO! Or “DERO!” for short is another Japanese game show. This is a game show where contestants are put in a locked room where they would have to escape. One such room is the retracting floor, people would have to step on the beams and failure to do so, you would fall and “die”.