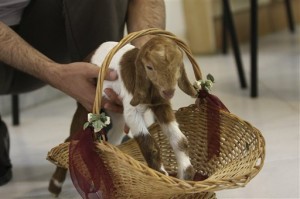 Something quite new from Iran today, they have released official reports that they have cloned a goat. Cloning in biology is the process of producing populations of genetically-identical individuals that occurs in nature when organisms such as bacteria, insects or plants reproduce asexually. The female goat, named Hana, was born early Wednesday in the city of Isfahan in central Iran, said Dr. Mohammed Hossein Nasr e Isfahani, head of the Royan Research Institute.

Isfahani says the main aim in cloning the goat is to produce medicine to be used to treat people who have had strokes. Very remarkable, I may add as there is no known solid cure for stroke patients.

Here in the US there are still controversies to the lawful use of cloning human cells to produce “cures” to hard ailments. Obama was noted as favoring researches to “Cloning in stem cells”. This process is also called “research cloning” or “therapeutic cloning.” The goal is not to create cloned human beings, but rather to harvest stem cells that can be used to study human development and to potentially treat disease.