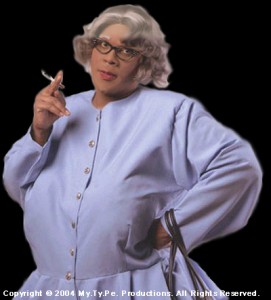 This lady is soooo cool!  We watched the movie last weekend and all I can say is that everyone was laughing so loud you couldn’t hear the movie no more.  Madea Goes to Jail is a movie you shouldn’t miss if you need a great time with friends.  I thought it would be at least all slapstick comedy, but no, the plot was good and so were the actors.  Most specially lead actor… or lead actress Tyler Perry.

It’s just a little too unfortunate that this didn’t make it to the Oscars, that would have been a hit.  Oh well, the least they could have done was have Madea present an award or something, right?  Could you tell I’m a big fan??? LOL.

Tyler Perry is best known for his awards and work for the following:

1. Outstanding Achievement in Writing
for: Diary of a Mad Black Woman (2005)

2. Outstanding Writing for a Theatrical Film
for: Diary of a Mad Black Woman (2005)

3. Outstanding Lead Actor in a Theatrical Film
for: Diary of a Mad Black Woman (2005)