While most tourists bypass this city for Florence, Milan and Venice, Bologna has much to boast of. Its very own Basilica di San Petronio is one of the largest churches in the whole world (It was originally meant to be bigger than St. Peter’s in Rome). The name of the church is named after the city’s patron saint. There is also a giant sun dial located inside. Pretty interesting for a church that possesses such a gothic and medieval architecture…

In fact, during the 12th and 13th century, Bologna had more than a hundred towers rooted on the ground. These towers were probably constructed by rich and influential families as a symbol of their power. However, there are only less than twenty remaining today. Among them are the famous Two Towers. The leaning towers themselves are considered to be symbols of Bologna. The taller one is called the Asinelli while the smaller but more leaning tower is called the Garisenda. While historical documents cannot pinpoint exactly which family had the towers built, certain pieces of literature have certainly done well to increase their mystery. 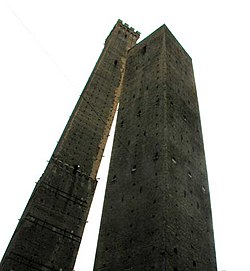 They could be sisters…!
The Two Towers have been mentioned several times by Dante in the Divine Comedy and the Rime. They have also been the subject of a poem by Giosuè Carducci as part of the Barbarian Odes.

The city has also been named a UNESCO City of Music in 2006. People from different stations of the world applaud the city’s honest drive to unite world differences through the power of music.