The Lower Ward in the 1840’s
Windsor Castle is known to be the largest occupied castle in the world. With its majestic walls dating back as far as the time of William the Conqueror, it should not come as a surprise that this place is crawling with ghosts. And they are not just ordinary ghosts but ghosts of royal blood!

At present, Windsor Castle serves as an official residence of The Queen. With the exception of certain dates, visitors and locals are allowed to enter and visit certain parts of the complex namely: the precincts, the State Apartments, Queen Mary’s famous dolls’ house, St George’s Chapel, and the Albert Memorial Chapel. 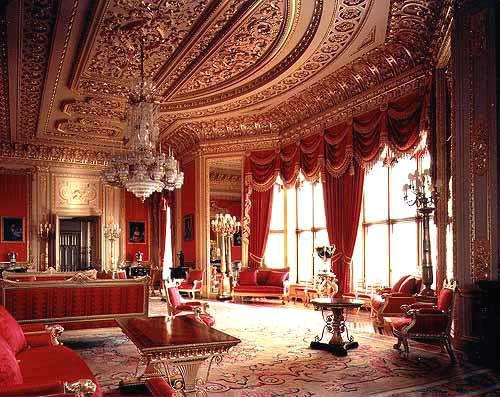 The Crimson Room
Since the time of William the Conqueror, much of the architecture has changed. In the 1170’s, the Round Tower was reconstructed, substituting the wood for stone. The lovely St. Georges’ Chapel was built by Edward IV and finished by Henry VIII. Not to mention the great fire in 1992 that destroyed nine principal rooms and over 100 rooms. Of course, the castle is now back to its former glory with a five-year long restoration.

However, no amount of restoration or reconstruction could chase away the number of royals still living in the castle.

“I have already joined myself in marriage to a husband, namely the kingdom of England.” – Elizabeth to Parliament

Elizabeth I, the queen during England’s Golden Age, is said to haunt the Royal library and many other royals claim to have seen and heard her.

“… there he was sitting on the Throne with his King’s Crown on, his robes scarlet and ermine, and held his speech written out for him, just what he had to say. But, oh dear, he strode up and made a bow and began “My Lords and Peacocks’. The people who were not fond of him laughed, the people who did love him cried, and he went back to be no longer a king, and his eldest son reigned in his stead”.

The face of mad King Georges III is often seen peering sadly from the window of the room where he was often detained.

“…to wish myself (specially an evening) in my sweetheart’s arms, whose pretty ducks [breasts] I trust shortly to kiss.” – his love letter to Anne Boleyn

Henry VIII can be found in the deanery cloisters where people have heard groans and dragging footsteps. A mysterious young boy who shouts, “I don’t want to go riding today,” can also be heard in the Deanery.

“Never make a defense or an apology until you are accused.” – Charles I
Charles I reportedly haunts a Canon’s house in the precincts.