A Russian playwright once wrote, “The embankments of the various canals had disappeared and all the canals had united into one. Hundred-year-old trees in the Summer Garden were ripped from the ground and lying in rows, roots upward.”

While there is substantial truth to his description of St. Petersburg, this was years and years before the great St. Petersburg Dam was built. The city itself is now one of the most beautiful in Europe. With its name passed down from one literary piece to another and its rich history of tsars, no wonder it is considered a UNESCO World Heritage Site.

One of the most significant sites in Russia’s old capital is the Peter and Paul Fortress. It was built by none other than Peter the Great himself. What used to be a means of territorial claim and a political prison for Russian historical figures is now a popular tourist destination.

Going back in time…
Visitors from all over the world as well as locals flock over to the Peter and Paul Fortress to experience the sensation of standing in the midst of where much has happened. The grandness of the walls and the gates, of course, enhanced that feeling of being sent back in time. Its architecture was crafted by St. Petersburg’s “first architect” Domenico Trezzini. Entry to the fortress grounds is free but it will cost around 120R ($4.50) to enter the other major buildings.

Speaking of buildings, one of the most sought after structures inside the fortress is the St. Peter and Paul’s Cathedral. Also bearing the design of Trezzini, it has a golden spire on top of the bell tower with the height of 122.5 meters, making it the tallest structure in all of St. Petersburg.

I remember an old saying about churches you visit for the first time. They’re saying that “A wish made there would be a wish granted.” While I don’t really keep track of my wishes, perhaps it wouldn’t hurt to make one when you visit the cathedral. After all, the golden angel that sits at its peak may just grant it. 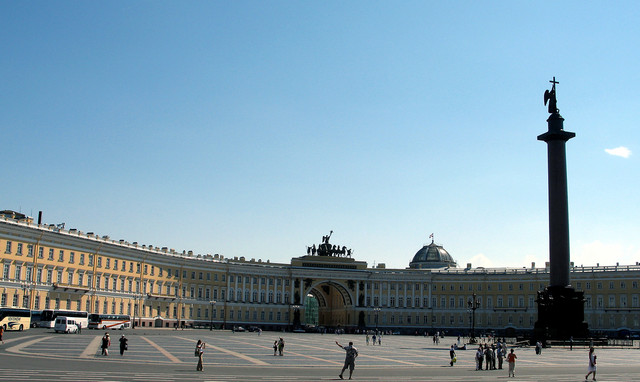 The Alexander Column continues to protect the city
Another popular tourist destination is the Palace Square. This is where the 1917 Revolution occurred. The square is surrounded by three equally breathtaking structures, namely: the Winter Palace, the General Staff Building and the Admirality. A large, 43.5-meter high column, called the Alexander Column, takes its place on the plaza as a symbol of Russia’s victory over Napoleon’s army. The name Alexander came from Tsar Alexander I who ruled during that challenging era.

I have to say, the people of St. Petersburg must really love angels for atop the column is another angel. They say that the angel’s face is supposedly modeled after the successful Tsar’s.

Take a stroll along the tree-lined paths…
A stroll in the city’s Summer Gardens provides a serene escape from the large architectures of St. Petersburg. They were originally built by Peter the Great who wanted his beloved city to have something to match the planned parks of Europe’s Royal estates. The gardens originally had 250 sculptures crafted by Italian masters but only 89 remain at present. There is also a Summer Palace somewhere inside that actually resembles a simple two-storey building (also designed by Trezzini). Despite its size, the Summer Palace is considered to be one of the oldest structures in St. Petersburg. Today, it serves as a museum for some of Peter the Great’s belongings and furniture.

For tourists who have satisfied their hunger for a lazy afternoon walk, there are also beverage stops around (1826 Coffee House, 1827 Tea House) where they can start quenching their thirst.