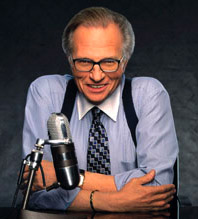 76-year-old Larry King has announced to fans and viewers that this fall, he is ending his long-running CNN talk show. Larry King Live will come to an end after 25 years on the air, holding a world record for having the longest-running show with the same host in the same time slot.

King reportedly asked to end the show on his own terms, so that he could spend more time with his family. But he has no intentions of fading out of the public spotlight, still planning periodic specials for CNN.

If CNN intends to launch a new nightly talk show in Larry King’s place, who do you think the host should be?