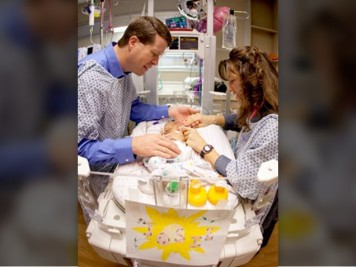 The whole Duggar family is no stranger to the limelight. They have been featured on TV, magazines, newspapers and every member of the family is used to the coverage. Last year, Michelle and Jim Bob Duggar announced that they were expecting their 19th child. Naturally, they were once again exposed to publicity.

On December 10, 2009, Michelle gave birth to Josie Brooklyn. She was born prematurely, at only 25 weeks’ gestation. The much awaited birth of the Duggars’ 19th child was a mixture of joy and anxiety as being born at this stage is a very dangerous affair. Indeed, Michelle has said that if her baby were born many years ago, she probably wouldn’t have lived even for an hour.

Yet seven weeks later, baby Josie Brooklyn is very much alive and doing quite well. In fact, the Duggars have finally introduced her to the rest of the world by releasing her photos. When Josie Brooklyn was born, she weighed a mere 1 lb and 6 oz. Today, she weighs 2 lbs. and 3 oz.

The whole family has been with her the whole time, moving temporarily from their home in Tontitown, Arkansas to Little Rock. Her current “home” is the intensive care unit of the Arkansas Children’s Hospital. The Duggars are quite happy with her progress and are very thankful for the doctors and the nurses that are taking care of baby Josie. They continue to express their thanks and say that they are hopeful that everything will turn out for the best.